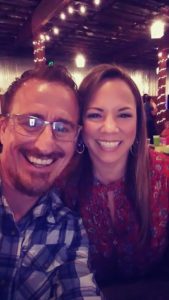 Personal Blog can be read at http://runninglight.wordpress.com/

Beau James Ouellette was born in Encino in the San Fernando Valley in California. He grew up playing guitar and loved going to many concerts in the city. The culture he grew up in was full of lustful inclinations and in turn love and lust become somewhat synonymous. He has a diverse background, and did not grow up in the Church culture. In high school he met a famous classical guitar player named Christopher Parkening at a church in the San Fernando Valley. That summer he spent two weeks in Montana State University with Christopher and heard the gospel for the first time. In the next year Beau started attending a small church called Calvary Chapel of Simi Valley and received Christ as his Lord and Savior!

Beau and his wife, Sylvia moved to Tucson, Arizona in 1994 after they were in a very powerful earthquake in Northridge California. Upon arriving in Tucson, Beau met Pastor Scott Richards and immediately was drawn to be a part of a new church work.
﻿
“I never ever thought that I would be a Pastor!” Yet this is what the Lord had in his plan for Beau. During his time of Ministering he has served as a youth pastor, worship minister, administrator & Assistant Pastor.

“Running Light was started to help me! I needed a place I could share my own sexual life without shame. And I knew there were many people just like me that grew up in a secular sensual culture and needed a safe place to talk now that we were in a Church environment.” Beau started RLM in 2007-2008 with the help of friends Karen, Dave & Buzz.

Over the years of the ministry Beau’s heart grows more convinced that the current state of the evangelical church needs to change the way they teach the Bible. “One of the fascinating truths I took away from the Bible when I began reading it was that these people were loved by God being such a mess. They never got it together! Some more than others, but the struggles that they faced were ones that I faced in my own life.” Beau desires for those that come to Church to understand that we all contend earnestly to be like Jesus. And this contunes throughout life. “Too many people in Church are loaded down by sexual shame and have no place to turn.” We must ask the question of why?

“Education happens not only by what is shared from a pulpit, but also what is not shared. Those that come to Church need an understanding of not only the truths of Christian doctrine, but also what it looks like to do it. This is quite humbling for us in leadership, as we have tend to think that leadership is not sinning, instead of showing people what we do because we sin. When this humbling is not present there is no resistance against the pride that will settle in a leaders heart. I might think I am doing well, but in reality I have become what Jesus struggled with most in his days in Jerusalem.” Self Righteousness.

Beau loves to teach on many subjects that deal with the Bible and sex, sexuality and sensuality. He brings a different perspective within the evangelical church which He loves.