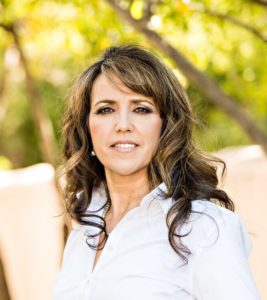 I was born and raised in Tucson and I have lived here my entire life. My parents believed in God, but we’re not followers of Christ. I grew up attempting to refrain from doing anything too bad, based on some unspoken morality messages in our family. However, life was empty and I continued to try and fill it with relationships, things and partying.

At 25, I met my husband Kevin, whose family were devout Catholics. I believe God used Kevin and his family to begin to draw me near to Him. Not long after becoming Catholic, I began doing Bible studies with some older women who were charismatic Catholics and, in addition, Bible study with some women I worked with who went to Calvary Tucson. Wanting what these women had, I began listening daily to pastor Furrow from Calvary Tucson on the radio and received Jesus as my Savior. From that time on, I became a follower of Jesus. I listened to Christian pastors daily, teach the Word and began studying the Bible.

After having four children, I believe God was calling me into counseling (something He placed in my heart before I was a believer and in high school). I pursued a masters degree in counseling. After graduating, I started working at a secular in-patient treatment center for a few years, but knew true healing can only come through Christ. I had worked with sexual infidelity in the treatment center as well as other issues, and knew I was supposed to continue counseling Christians in this area and integrate tools I learned but with a Biblical worldview and emphasis. Shortly after, I found pastor Beau online and connected with him and have been blessed to be part of RLM since. I currently counsel infidelity, pornography, other sexual acting out struggles, as well as general marital issues, alcohol/drug abuse and mood issues. In counseling, I use the Bible as the ultimate authority, and focus on one’s relationship with Jesus while giving my clients practical tools to help assist in their healing.