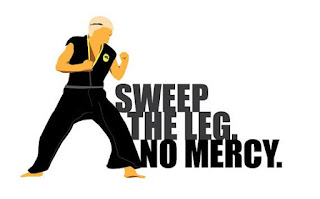 When I think of football I think of chopping off someone at the knees to bring them down!

Especially when I was a kid playing outdoor tackle football with the neighbors who were bigger then me!  If you can get the legs, then the’ll come down my dad always told me.  And he was right!

Just as without legs a person will fall down in a football game, so there are also legs that we stand in in our life philosophies.  If the legs get taken out, then the top will crumble as well.


Psalm 11:3 If the foundations are destroyed, what can the righteous do?”

We live in a world of ideas, and those ideas shape us, and dare I say, some of those ideas undercut us at the knees to where it becomes easy to fall.  I can’t think of a greater one in our day than the teaching of macro evolution.

Macro evolution, or ape to man evolution, if a fact, destroys not only Christianity, but most religious endeavors.  I grew up being taught evolution.  I am familiar with it.

To believe in the Bible’s truth statements of the creation, the fall, the curse, the catastrophe, the confusing, the cross & the consummation would seem ridiculous if popular historical science today has it right.

Why throw of religious inquiry and substitute it for secular materialism?

“I had motives for not wanting the world to have a meaning; and consequently assumed that it had none, and was able without any difficulty to find satisfying reasons for this assumption. The philosopher who finds no meaning in the world is not concerned exclusively with a problem in pure metaphysics. He is also concerned to prove that there is no valid reason why he personally should not do as he wants to do.
For myself, as no doubt for most of my friends, the philosophy of meaninglessness was essentially an instrument of liberation from a certain system of morality. We objected to the morality because it interfered with our sexual freedom.
― Aldous Huxley, Ends and Means

Now hear me…Evolution is not the cause of us wanting to watch pornography or commit adultery, but it certainly provides the worldview to continue to do it!  But’s it’s not the only one.  People use religion as well to continue there lifestyles.  To Joseph Smith or Brigham Young (Of Mormon fame), those who practiced monogamy were in the wrong!  So in both worldviews, the evolutionist or the Biblical believer, you can use your worldview to do what you want to do.  So what are we to do?

The true undercutting of faith seems to me to be the life, death and resurrection of Jesus.  Even Paul, the follower of Jesus who wrote most of the New Testament agreed!  In his letter to the Corinthian Church he writes that if Jesus is not raised from the dead then our preaching is useless and we are to pitted above all men!  What did Jesus think about lust, men & women?  What was Jesus worldview and is he a credible person to trust on issues of life & death?

This brings me personally to the choices that I need to make in life.  Is Jesus who he claimed to be?  If so, then we need to think through what we do in light of what he said.  If it seems that there is a focus to undermine the validity of the Bible, and in turn, the life of Jesus.  Well you are right.  The evolutionist and the Mormon both have done just that!  You can either see evidence for the non-existence of Jesus (The Atheist) or you can mis-represent what it is written about Jesus and what he said.  In both circumstance Jesus is not a source of truth.  And that’s what this boils down to; what is truth.  Is it ok to commit adultery?  TO watch pornography?  etc…  What is our source of truth, of right or wrong?

Its our belief system that brings us to think something like pornography or adultery is wrong.  We can change our beliefs anytime.  But we also can be renewed in our mind to see things Jesus way.

To cut out Jesus from history is to sweep the legs, bringing down the Christian worldview on sex, marriage, lust & love.

The following is a great video teaching from one of team members of Stand To Reason Ministries called Shattering The Icons of Evolution.  Enjoy!