To whom it may concern:

Not everyone grew up listening to Janes Addiction…”Who is that,” you might be asking! But enough Southern Cal music culture (circa 1989) references. But what I cannot understand is when Christian writers/speakers use the word “shocking” to describe the sexual behavior of conservative leaders, Pastors, or laypeople. It is really shocking that they might desire to view pornography to you? Does it shock you to know that there are human beings that have faith in Jesus, yet also desire to act in non-Christian sexual ways? If so, we just can’t seem to figure out what Bible you are reading!

The Bible makes it clear that we are incapable of following a perfect God perfectly. Can you? Yet this is the standard to be with a Holy God. “Be ye perfect as your heavenly Father is perfect.” Some think they do this…kind of. But if we take a spectrum and say, Jesus, and his perfection is at 100; where do you think you are on the spectrum? 50? 70? Just thinking you are on the spectrum is probably a sure sign of hell for you. Do you really think you are close to Jesus in your thoughts and actions? Ever heard of the rich young ruler? He thought he was.

If we happen to make it on the spectrum at all, we couldn’t even boast we’d made it, for it was Him all along working in us to will and do according to His good pleasure. We are working, but His grace all the more. So thinking your on the spectrum is a sure way of admitting you are not on it at all! If you and I were on the spectrum, we wouldn’t have a inclination that we were. It just would be. A tax collector went up to the temple to pray…He stood afar off and felt ashamed to even pray to God. Yet he was the one in the right. The religious man stood in the temple area and thanked God for his good behavior. His righteousness. His holiness. Sound familiar? The tax collector had no clue he was in the right with God. He just was.

The Bible also tells us in detail of the men of faith (Hebrews 11) that struggled mightily with there sexual conduct. These are the people we teach little kids about in Sunday school. “The sword of Gideon!” Yet Gideon was a polygamist and had many concubines. Both would be considered quite wrong for a Pastor today.

The Bible tells us that the greatest missionary(Paul) struggled with lust/covetousness, and by the end of his life he called himself, “the chief of sinners.” It seems the more he aged, the more he realized the greatness of sin within his members. Charles H. Spurgeon understood this:
“I believe a Christian on his death-bed will more bitterly repent than ever he did before. It is a thing to be done all your life long. Sinning and repenting—sinning and repenting, make up a Christian’s life. Repenting and believing in Jesus—repenting and believing in Jesus, make up the consummation of his happiness. You must not expect that you will be perfect in “repentance” before you are saved. No Christian can be perfect. “Repentance” is a grace. “

The Bible also has the most highest of moral standards. Why? Because it is written by men, moved by the “holy” Spirit. Can you do them perfectly? For instance the word fornication occurs in only four classical authors in the Greek and Roman era, “by contrast the word occurs nearly for hundred times in Jewish and Christian literature before 200 C.E. and over eighteen hundred times between 200 and 600 C.E.” (Footnote 1). I think we get the picture that sexual conduct (holiness) is serious to God. He demands perfection in our sexuality, sex and sensuality. Have you achieved this?

The ramifications of those in the Christian community that consistently use the old paradigm of being shocked are living in a world that does not exist, and quite frankly, never has sense the garden. Sex and sexual behavior of all kinds has always existed. Firm Monogamy has not been the standard or norm of human sexual history. Sexual variety has been the norm for human beings. Most people have had more than one sexual partner in there lifetime. To be shocked that people of all ages like to view sexual images is actually shocking! We have always been into images whether on walls or on a computer screen. Throughout history men have used women for sex, as concubines, slaves, harems, prostitutes, mistresses, call girls, escorts. Are you shocked by this?

Did you expect the Christian to not be tempted or tried? Do you expect them not to give in? Do you expect them to be different from those in the scriptures themselves? Are we so blind as to not see our own personal sexual failures? Are you also shocked by how many large people there are in Church or at the pulpit? Are you shocked by how much pride Pastors and Leaders have? There we are like the rich young ruler…sharing with Christ that we able to keep the law again? Are you shocked that Pastors are learning to crucify the flesh as well? Or are they suppose to already have that down like you do?

The ramifications of this old paradigm is to keep the Church perpetually in panic over sex; desires, wishes and wants; or even thoughts. It makes counseling people unbearable as know-one knows how to discuss our sexualized culture without being fearful, offended or afraid God will send them to hell; or already has. This paradigm, as practiced by the Pharisees, keeps people who do not struggle (or think they struggle) in control of those that do. They might struggle in other things, but at least they don’t (or so they think) in sexual conduct. They are “pure.” This is a extremely saddened paradigm that continues to rule. But it is perpetuated over and over again. It is a part of our corruption.

Speaking to Israel, the Apostle says,”The Lord is blasphemed because of you!” Have we ever thought that maybe this could be the Churches fate as well as Israel? Are we any better? Would we not too Crucify the Lord of Glory? Will the Church not fall away as well?

Why can we not share the highest of moral code, and have the wherewithal to admit we cannot not achieve this without divine intervention of the most serious in nature. We need to die. Literally. But until then, we will be having to renew our minds to reckon ourselves dead to sin and alive to Christ, over and over and over again. As Spurgeon said, “sin-repent, sin-repent…” May God send the helper to help us.

There is a misinterpretation of Jesus teachings that is happening again. Peter and I (Beau) are working through this in our discussions. Stay tuned to our Better Pleasure Podcast as we no doubt will hope to be discussing this misinterpretation and it’s ramifications.

May God help us all. The shocking thing…really…is that God has shown us his love and commitment to us in Christ. Without Jesus, all hope to commune with the Almighty is lost.

Much Happening – O2
We are planning on having booths at 4 states this June with Pastor Levi Lusko to help get students of all ages signed up for the Way of Purity course at SettingCaptivesFree.com in the hopes that they will experience a understanding of the bettler pleasure of God as compared to the Lust that the world offers.  As we know…there is no comparison between the Love of God and what this world holds so dear.
If you are able to help financially with a gift please do so by visiting runninglight.org and find the PayPal icon on the right.  Thank you so much for those that give to this ministry.  That average age of porn exposure is 11 and some say 9 years of age.  By the time they reach the University many have watched hours upon hours of hard core porn.   So many need to get into the free course work at S.C.F..  And that’s why were at the events!
Southwest Calvary Chapel Pastors Conference 2013
We just had our booth at the conference and boy what a turnout of people wanting to talk about the problem of online adultery that has resulted in 56% of the divorces that we see statistically!  Yep that’s right, people are online having affairs all the time today.  If not physically than emotionally.  I have seen just how devastating this is in a marriage with those that have come to us for help.
The need for groups at your fellowship
I have put a link on the right side of the runninglight.org website for you that are leaders at your fellowships that desire a group.  Please check it out.  Wouldn’t it be awesome to have Bible study groups that are not afraid to walk in the grace of confession, amputation, repentance, accountability weekly!?!?  So many Bible study groups we have give us a opportunity to drink from the well of Jesus, but not many are expecting that we walk in the other joyful ways of grace.  It’s cool to know that when people come into our groups they desire the entire package of walking with Christ.  Hey, it’s our joy!  let’s go after Christ!
New contributors to R.L.M.We have two new contributors to Running Light Ministries!  Katy Collins and Peter Martin.  Katy helps with the women that are in bondage to lust and single women.  Peter Martin helps with single men, married men, and especially those that have been in the military.  He is a former Marine with combat time.  The RLM team are stoked to see how the Lord will use these two for and to His Glory and NAME!  Women today exercise there freedom to pursue pleasure on their own terms just like men have for centuries!  Lust knows no gender, so pray the HOLY Spirit to guide as we open the Way of Purity course to a women’s group! 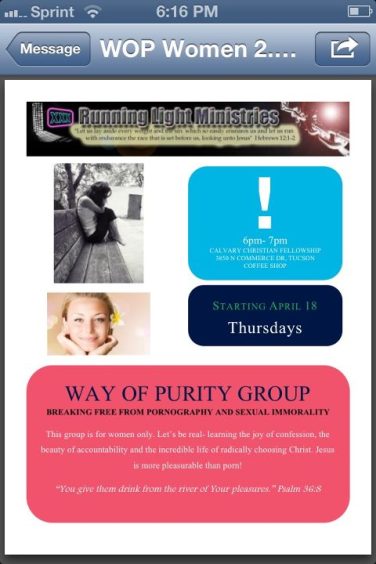