By a RLM contributing writer 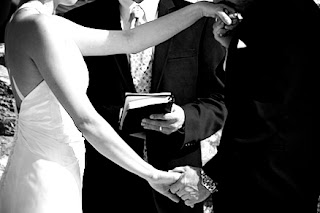 Right after church Sunday I went to a bridal shower. What a delightful afternoon and time with the bride-to-be, her friends and my family. The festivities were typical of a bridal shower: food, cake, presents and games. All was well with my soul until the final game was presented to us. It was at the moment the game was introduced that I felt completely gridlocked. I struggled with what to do and how to react.

The jam in my soul was due to the sermon I heard only a few hours prior. The message Pastor Scott delivered in Numbers 30 was still sitting in my heart, mind and soul. It had really impacted me. During his message, Pastor Scott spoke of the words that come out of our mouth and how important they are to God as well as the vows we have made and that those vows should be kept. For a while now, it has been my heart’s desire to glorify God in my marriage. It’s one of the top priorities in my life and I take it very seriously. By the way, I’m constantly working at it. Tim and I sat there listening to Pastor Scott, and we were in unity. We squeezed each other’s hand in agreement several times and chuckled together. We even made quick little comments to each other during the message. After service was over, I left church with a renewed purpose and desire to glorify God in my marriage by honoring my vows and keeping a check on my words.

The game that brought me to the gridlock was this- we were given a piece of paper and asked to write our name on the top, then instructed to write down the name of a celebrity we would want as our husband. Once the papers were turned in, the celebrity names would be read aloud and we’d have to guess which woman in the room desired to be married to that celebrity.

Seems innocent enough? Well to the world perhaps but not to me, especially after sitting through Scott’s teaching in Numbers 30.

In the moment of gridlock at the bridal shower, I knew that God had used the Numbers 30 message to prepare me for the game at hand. Immediately I began to consider the verses Pastor Scott took us through and felt the Lord preparing me and setting me up to have the boldness to live out the principles in Numbers. One such verse was Ecclesiastes 5:2, 6, which says, “Do not be rash with your mouth, and let not your heart utter anything hastily before God. Therefore let your words be few. Do not let your mouth cause your flesh to sin, nor say before the messenger of God that it was an error.”

Upon receiving the instructions, I was instantly flooded with so many thoughts. Here is a young woman who is soon to be married and we are encouraging her to think of another man she’d rather be married to! How on earth does that honor her soon-to-be husband? How does that encourage her to keep the vows she will soon be making? Thoughts continued like- We have a room full of married women who are likewise being encouraged to fantasize about another man being their husband.

Sitting there, I felt the game was dangerous and was dishonoring to our husbands. We were being encouraged to lust after other men. And, subliminally, we were being led to believe that we should not be content with the husbands we have, but rather to think there is a better one out there – especially if he’s a celebrity.

I was barraged with more thoughts- How can I play this game? What can I do to not play? Should I play along and come up with a name? Finally, however, I thought- Well okay, I’ll just go along with it. But I just couldn’t. My mind wouldn’t go there. In all honesty, there is NO celebrity I’d like to be married to. That’s just insane. Celebrities are screwed up! Plus, I LOVE my husband. I also like him and think he is very sexy and handsome. I have no desire for any other man – even in a game-like setting. But what kept eating at me more and more was that I didn’t want my words to dishonor my husband, which would dishonor God. I wanted to live out my vow to God and to my husband even in this seemingly innocuous game.

Thankfully, the Holy Spirit took over. There is no other explanation. First of all, only the Holy Spirit could have caused this reaction because my people-pleasing nature would not have initiated this. Secondly, He helped me come up with what to say. Instead of writing down a celebrity name, I was prompted to write down the name “JESUS”. (He’s pretty famous!) I knew instantly that writing this name down would be controversial in this group. Again, a gridlock set in along with conflicting thoughts. What will these women think of me? Am I acting too spiritual and self-righteous? I hesitated to write down His name and I tried, again, to come up with a celebrity name that would be ‘acceptable’ but my spirit simply would not let me write down another name. So under the name “JESUS” I wrote, “I couldn’t think of anyone else I’d rather be married to.”

There it was. I was committed to keep my vow to God and to my husband and was determined to keep my words glorifying to God. There was no turning back. All the slips of paper had been turned in and the game was being played.

One by one the names of the celebrities were called out along with the inevitable responses:

“Channing Frye – He is so HOT. Can you believe his body! What I wouldn’t give to be married to him.”

You get the picture. The comments were lustful and flowing like a fountain without hesitation. My heart was saddened. I was also anxious about my ‘desired famous Husband’s’ name being read among this list and among these comments.

Several names were called out, the responses were lustful and dishonoring to the husbands of these women and then the name JESUS was called. The room immediately burst into laughter. It was not just one woman who giggled a bit, but the entire room laughed… hard.

I kept my head down. I wasn’t ashamed of my answer. Rather, my head was down because my spirit was grieved for these women. Here was a room full of ladies who do not know Jesus as their Husband and have never been told that He desires them as His bride.

The reader of the names ended the laughter by saying, “Seriously?” I lifted my head and replied, “Seriously.”

Please hear me- this was not a self-righteousness act, this truly is my heart.

But I knew that I could not. I knew the women would not receive my words of Truth because they have not received His Truth in their hearts. Pastor Scott shared with us Proverbs 29:18, “Where there is no revelation, the people cast off restraint; But happy is he who keeps the law.” There has been no revelation for these women. They do not fear the Lord or want to keep His laws. I knew anything I said would be foolishness to them (1 Corinthians 1:8). So instead I let my words be few.

“Seriously,” was all I could say.

After an awkward silence, the game resumed and the next name was called and the lustful nature of the game, along with the dishonoring of their husbands, continued. It was hard to sit through the game. I tried not to look pious, but couldn’t deny the sorrow within me. Deep inside I was grieved and my heart was uncomfortable.

Writing this the next day, I can say that I’m glad this happened. I’m glad I was presented with an opportunity to live out a principle of Scripture. I want to honor my vows to the Lord and to my husband and I want my words to be honoring as well. I was a foreigner at the bridal shower. I didn’t fit in to their worldly point of view of ‘fun’. For a moment, I cared about what they thought of me but eventually I let that go because I truly fear the Lord and care more about what God thinks about me.

“When you eat the labor of your hands, you shall be happy, and it shall be well with you. Behold, thus shall the man be blessed who fears the Lord.” (Psalm 128:2, 4)