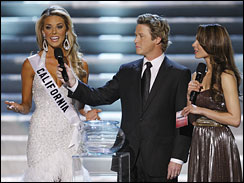 “Miss California Pageant Co-Director Keith Lewis confirmed on The Early Show Friday. He also said reports that the Miss California pageant helped foot the bill for the operation were true.”

Maggie Rodriguez who interviewed Keith Lewis sounded appalled that getting breast implants would increase her changes of winning. It sounded a bit staged to me. I mean where does Maggie live? Pluto! Everyone today who has gone to a store has more then likely bought a doll that had a Miss America figure with… well, a we endowed set of breasts.